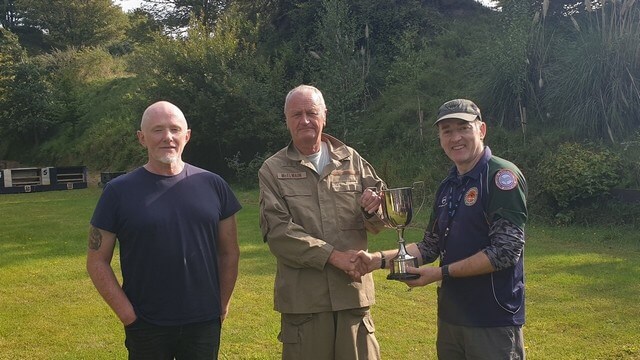 It’s that time of year when East Coast Shooting Club and BRC meet on the firing line, toe to toe, sling to sling, and battle it out for the glory of their club.  Well…sort of, the Kiel cup is more of a social event where the clubs come together for a friendly challenge over a course of sills and a sporting rifle match.

Each club nominates four competitors for their teams, each competitor then shoots a 50m Prone detail, and a course of 20 silhouettes ranging from 40 to 100 meters.  The best of their two 50m Prone cards + their sills score are combined for each competitor, then the highest three scores from the team are aggregated to give the Team Score.

Congratulations once again to the East Coast team for winning the Kiel cup for the second year in a row, with a very strong performance in the silhouettes.  Team comprised of Nicholas Flood, Hugh Daly, Sean McElwain, and Ralph Lochner.

As is tradition the Kiel cup match rotates between each of the clubs each year, this year being BRC’s turn to host the event.  For those of you who have not been to BRC it has one of the nicest club house facilities in the country with a fully stocked refrigerator, endless supply of buns and biscuits, and a relaxed and enjoyable atmosphere.  Needless to say everyone was in top form, which showed in their shooting too.

Most notable being Anthony Fagan who borrowed my 10/22 to shoot the Semi-Auto Benchrest, and without adjusting the scope that was zeroed for 25 meters he shot a 483.017 setting a new national record in Semi Auto Benchrest.  It also trumps the current record in the Factory Sporting class too, an amazing achievement.  Other notable performance was BRCs Frank Feeney who shot a 397.025 in 50m Field Sporting Prone, just one point shy of the current record.

Our next event is Donegal Target Club, hosted at Bracken, Strabane this Saturday the 31st of August.