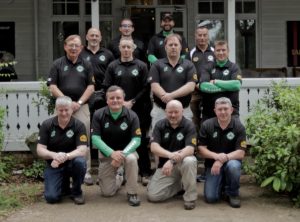 The Phoenix 17 was a huge success for Ireland across the board.

You will no doubt have read Dean Parkers update on the Target Shotgun guys – who on their first International outing did us all very proud.

I would like to give you a bit of a tally on how we did in the Gallery Rifle Sports – and it was one of our best.

There was a very large number of Irish Competitors – 30 or so – although at times it looked like far more. The weather was amazing – temperatures in the high 20s with plenty of pasty white legs getting their first outing in a pair of shorts.

NASRPC had entered teams in both the GRCF1500 and GRSB1500 IGRF International matches.  We were quietly confident going in – but the British and German teams are very strong so we needed to bring our A game. And we did.

When all the tallying was finally done …..

In the Centrefire match we only managed Silver – but with some very good shooting.

These are always very tightly contested matches  – and with teams coming in from South Africa and Australia aswell for the World Cup in MNSCI in in July – it’s gonna be even tougher ……. But we’re gonna do it.

I have spot picked out on the mantlepiece for the World Cup.

Right between the picture of JFK and the child of Prague.

Individual performances were no less impressive.

Hilltops Denis Cummins & Paul Carr and Harbour Houses Toby O‘Brien all shot personal bests in the GRCF1500 – with Paul Carr taking the gold in his class.

The standard of shooting is in a very good place here in Ireland at the moment – and bodes well for both team and individual performances in the upcoming World Cup in MNSCI in July.

It wasn’t quite the Isle of Man – but the craic was 90 nonetheless.

We filled ferries, planes, trains, automobiles, you name it  – and headed for Bisley

The accomodations were, as always “eclectic”.

The Germans, as always,  put on a great night for everyone on the Saturday night – if you want to know more – you’ll just have to go next year!!.

As always the banter and craic with the ROs was going on all weekend.

But we loved every minute of it – and we won round us …… and we can’t wait to do it all again next year.