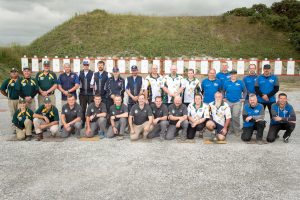 Midlands National Shooting Centre in Offaly hosted the international competition with competitors from the 20 NASRPC clubs in Ireland attending and from countries around the world.

The IGRF World Cup and Irish Open was a great success with all of the nations commending the venue, Irish hospitality and professionalism of the organisers and Range Safety Officers.

Ireland is already looking forward to travelling to the next IGRF World Championship in South Africa in 2019 to defend their title.